We utilize a proprietary ClO2 vapor gas systems which can completely eliminate allergens and unpleasant odors, by removing the source. Our advance system not only removes the offending odor, but completely sanitizes harmful germs, bacterial, allergens and indoor contaminants without leaving any harmful residues. It doesn’t use harsh toxic chemicals, fragrance masking agents or odor neutralizers. Even delicate surfaces and heating and cooling systems can be completely sanitized against a multitude of germs, allergens, odors and indoor contaminants in a fraction of time. Our system will save you time and money compared to other odor removal companies.

CLO2 contains a chlorine atom, its chemistry and properties make it more similar to oxygen than chlorine-making it an effective and environmentally safe biocide ideal for disinfecting vital water supplies to exacting standards.

ClO2 is an especially effective disinfectant because bacteria can not develop a resistance to it. Regardless of its concentration or contact time, chlorine dioxide reacts immediately with the cell walls of microorganisms.

ClO2 is soluble as a true gas. The ClO2 molecule remains a true gas in solution-making it more energetic and able to reach all points in a system. Because, it’s a true gas and soluble in virtually anything, it can penetrate bacterial slime layers-biofilm.

Finally, chlorine dioxide and its primary by-products-chlorite and chlorate-all break down to sodium chloride. This, along with failure to form toxic and carcinogenic chlorination by-products and produce a build-up of toxic organic or inorganic by-products like bromates, makes chlorine dioxide the most eco-friendly biocide that can be used.

Sir Humphrey Davy, a British chemist, discovers chlorine dioxide (Clo2), a result of potassium chlorate reacting with sulfuric acid. Although he fully understood the chemistry, he most likely did not appreciate the consequences: Clo2 will prove to be more effective at killing more viruses, bacteria and fungi than any comparable disinfectant, such as chlorine bleach.

Because of the disinfecting power of Clo2, use begins to grow. A major benefit of Clo2 is that, as a true gas, it expands uniformly to fill the space it’s disinfecting. Due to concerns about the logistics of safely transporting the gas, industries wishing to use it decide to simply make it themselves in large quantities and activate it on site.

To mitigate taste and odor problems, Clo2 is introduces into a water treatment plant at Niagara Falls, N.Y. Other municipalities soon do the same. The water not only tastes better and has no unpleasant odor – it’s also safer to drink, thanks to Clo2’s strong disinfecting properties.

Brussels, Belgium, changes from chlorine to Clo2 to disinfect drinking water in 1956. The 1950s see widespread use of Clo2 in water treatment plants and swimming pools in the U.S. A new discovery is made: Clo2 destroys biofilm, the algal slime that collects in cooling towers, among other places and harbors harmful bacteria. Chlorine bleach by contrast cannot kill biofilm.

The Environmental Protection Agency (EPA) registers an aqueous form of Clo2 for use as a sanitizer and disinfectant. Even though it aggressively attacks pathogens it is extremely safe and Clo2 is eventually used to commercially sanitize fruit.

The EPA begins recommending using Clo2 instead of chlorine bleach to treat water because Clo2 does not produce any harmful byproducts. Although chlorine and chlorine dioxide share a common name, they are fundamentally different chemicals with distinctly different chemical structures. This means they react differently when mixed with other compounds. Chlorine bleach is formed by adding chlorine gas to salt water. However, when chlorine bleach reacts with naturally occurring organic and inorganic matter in water streams, it produces THMs (trihalomethanes). THMs have been linked to cancer. Because of its superior efficacy and how safe is its, use of Clo2 continues to grow.

The EPA registers Clo2 as a sterilizer. This means Clo2 is both safe and effective to use in hospitals, healthcare facilities, and laboratories.

Clo2, in both liquid and gas forms, becomes the number one substance used to decontaminate buildings where the anthrax attacks occurred. It’s success rate is based on how well is works against very small anthrax spores, how quickly and easily it is deploy. Clo2 completely destroys anthrax without harming buildings.

Clo2 is deployed to eradicate mold infestations in homes damages by the flood waters from Hurricane Katrina. After a 12-hour treatment, a New Orleans restaurant is able to banish all mold inside without rebuilding.

Chart below shows the effectiveness of CLO2 compared to other products used by professional odor removal services. 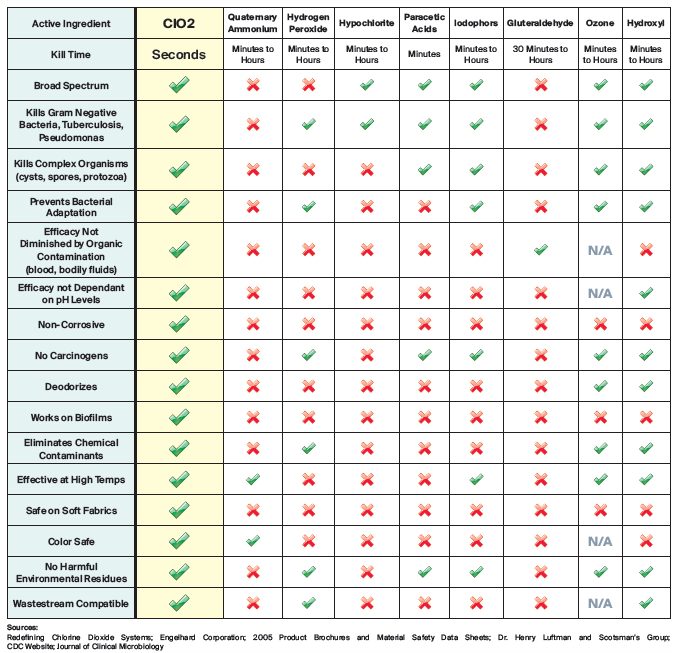 Please call us today and find out how our exclusive environmentally friendly system will protect your family members, friends, pets and customers against a battery of germs, indoor contaminants, allergens and odors safely and effectively without and harmful chemical residues. We offer an unconditional 100% Money Back Guarantee if you are not completely satisfied!